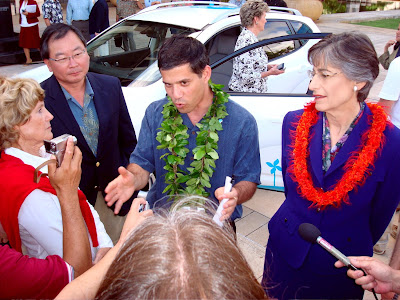 Better Place CEO Shai Agassi meets the media today with Gov. Linda Lingle and Ted Liu, Director of the Department of Business, Economic Development & Tourism.
(See 12/4 Update at end of this post.)
If you’re going to skip a meeting with President-Elect Obama and 41 of your fellow governors to craft an economic recovery plan for the nation, you’d better have a news-making plan of your own on the same day. Hawaii Governor Linda Lingle didn’t disappoint.

For the second time in less than two months and the 10th time this year (see notably the "HECO Plan” and the Hawaii Clean Energy Initiative), the Governor’s office was host to an energy-related announcement, and this one appears to have the potential to transform transportation in the Aloha State.

Shai Agassi, Founder and CEO of Better Place, was today’s featured speaker at the Governor’s press conference as he outlined a plan to make Hawaii the test kitchen and proving ground for widespread introduction of electric vehicle (EVs).

Noting the state’s abundant renewable energy resource potential and the historically high price of oil, Agassi said Hawaii’s case for electric vehicles has become even more compelling. According to a Better Place handout:

“At the same time, technological developments, particularly those related to batter technology, mean that electric cars are becoming more advanced. Hawaii is ready for the large-scale adoption of EVs and is poised to become a leader in environmentally friendly technologies over the next few years.”
Better Place’s Plan

Agassi’s company is into building electric car networks that will make internal combustion engine vehicles so last century. His website has two press releases dated today. The one on Hawaii says the state is the second to commit to oil independence by joining “the Better Place network.” (If you have to be Number 2 to anybody, it’s pretty cool if California is Number 1.)

Follow the above links to websites for more information, and for those of you who can’t get enough news about Better Place and EVs, we’ll add to this list as the media coverage becomes available.
• The Washington Post
• The Honolulu Advertiser
• The Honolulu Star-Bulletin
• KGMB-TV (video)
• KHNL-TV (video)
• KHON-TV2
• Reuters
• Chicago Tribune (with a "first statewide network" angle)
• The New York Times
• The Wall Street Journal
• earth2tech
• greentechmedia

12/4 Update: The Honolulu Star-Bulletin's editorial today mentions the "chicken and egg problem" in developing an electric car and plug-in network that others have identified, including National Public Radio earlier this week.
Posted by Doug Carlson at 4:25 PM

Jeff Wilson talked about this in his recently released book The Manhattan Project of 2009 Energy Independence NOW. I found it fascinating but thought it a bit futuristic. It is exciting to see the very plans he talked about in his book beginning to unfold NOW. Go Hawaii, Go Better Place, show the rest of the world how to do it…and go Jeff Wilson and your new book The Manhattan Project of 2009

Just one problem with this. Oahu's electricity mostly comes from burning oil.

Scott, you're right about Hawaii's current dependence on burning oil to produce our electricity -- about 78% worth. But the goal is to transition to renewable energy sources. HECO is committed to that goal, and the 10.15.08 agreement between the utility and the State is intended to facilitate the evolution. Not only will the future electric cars be powered by wind, solar and ocean energy, so will Honolulu's elevated rail transit system that's still on the drawing boards.
Thanks for following this story.

While looking for alternatives is to be applauded, I believe that the dialogue should also include that renewables cannot step up to supplying as much energy as oil. That solar cars need a carbon infrastructure to be built. That PV cells are made in a clean environment that need a carbon infrastructure to produce. I see solar vehicles acting as a steeping stone to what the future holds for future generations - not what future generations will be using.