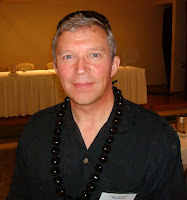 The Pacific Congress on Marine Science and Technology (PACON) wound down today with an assertion by keynote speaker Peter Englert that trans-disciplinary “radical innovation” will be required by universities and other institutions to keep carbon dioxide in the atmosphere below 450 ppm (it's currently about 385 ppm).
Professor Englert is with the International Center for Climate and Society at the University of Hawaii and spoke on “Trans-Disciplinary Research in the Design of Responses and Response Strategies.” Understandably, he sees a central role for higher education in the climate change crisis.

Englert believes universities require innovative approaches to achieve the goal of becoming trusted resources of trans-disciplinary scholarship, knowledge and advice on regional and global solutions. Their effectiveness will depend on whether institutions can change the paradigms they’ve used for the past century.

Englert said science tends to dismiss the value of traditional knowledge from indigenous cultures and destroys it by trying to fit it into the scientific framework. “We need to recognize knowledge outside the non-European world and framework as being equivalently valid,” he said.

This was a major theme of the Blue Planet Summit, where Ramsay Taum spoke on “Hawaiian Legacy of Sustainability, Inspiration for Today.” (Taum is Director of External Relations and Community Partnerships at the University of Hawaii School of Travel Industry Management. His video presentation can be seen here.)

We’ll end our PACON reporting by noting the efforts of Dr. Gerard Pereira, president and CEO of Energinat S.A., which intends to use ocean thermal energy conversion (OTEC) to end the crushing poverty of Haiti, his native land.

Pereira’s presentation noted that deforestation affects 95 percent of Haiti; once agriculturally rich, Haiti now has only a few areas where agriculture can flourish.

OTEC can be the key to resurrecting Haiti’s economy, says Pereira. Water depths of 1,000 feet are found close to shore, and there are five good sites where OTEC plants could be constructed to produce electricity, pure water for drinking and irrigation and, eventually, hydrogen for the coming hydrogen economy.

“Sustainable clean energy is the key to ending poverty,” says Pereira, “and Haiti has an inexhaustible gold mine of possibilities through OTEC.”
• Read why we started this blog back on March 14th.
Posted by Doug Carlson at 10:51 AM